One may understand the cosmos, but never the ego;
the self is more distant than any star.
~G.K. Chesterton

Minus four degrees whisked by a wind chill for a frigid winter day in Maine.  No nature walk today!  A weak sun occasionally peaks through the grey clouds, but adds none of its distant warmth to this colorless day.  It is Saturday.  I awakened slowly this morning, remaining tucked between my cozy French linen sheets for a while and savoring the comfort.  I take a few moments to be come centered and focus to carry this balance into the conscious existence of the day.  A quick video call from my granddaughter put me in a happy mood for a moment.  Then she hung up .. without warning .. off to do some adventure of the moment.

She is just six after all.

Still snuggled, I catch up on evening texts from my brother.  He was watching the movie “Arrival” again; a complex sci-fi film where a linguist is basically the savior of Earth and the aliens bring knowledge instead of war.  Texting quickly, we rush off in a discussion of theories of language effects on the brain and multiple language approaches.  “The Sapir Whorf Hypothesis states that the immersion in a foreign language actually rewrites your brain”, he texts,  “ – Linguistic Relativity – as can be done with math as well.” To which I respond that math is, of course, a language.   I share that when I am speaking in a foreign language and my mind hiccoughs over a needed, but momentarily forgotten, word, it automatically seeks a similar-meaning word in the next language (I am tri-lingual).  My brother comments, referring to the Ur-language hypothesis: “Inferring cognitive differences based on linguistic differences can become a circular argument.  Because different languages rely on different cognitive patterns and routes, some less linear than others.  That’s where [the movie] gets the concept of time and relativistic theory, and while it’s highly unreliable at this point, it makes a lot of sense.  Although they made it up for the movie, people are starting to investigate it with weight and import.”

Yes, these are how our texting conversations often run.

Meanwhile, as I wait for his responses, I am off watching Carl Sagan YouTube videos.  Compilations of “Ten Times Carl Sagan Blew Our Minds”.  Now I’m off on a science and spiritual contemplative hour.  Language, science, spirituality, the cosmos, and Life.

No surprise that I run across Liz Gilbert a bit later in the morning, touting the importance of self-love: 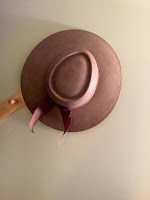 I glance around and focus on my paja-toquilla hat (called “Panama” hat) hanging on the wall.  It reminds that I was in Ecuador just a couple weeks ago, but those two and a half weeks seem like months.  Since the abrupt return from my South American trip, I have been occupied mostly with caring for my 90-year old mother (who had contracted pneumonia and was very sick in the hospital – hence my early homecoming).  My older brother had born the weight of most of her care and visits, so I hoped to give him some relief as well.  My father, 90, is also struggling with health issues. 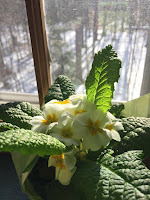 Between visits, I try to be with my daughters and grandchildren as much as possible, but to small avail.  I am also attempting to organize my present personal life: what I am doing, where I am going, what are my dreams and plans?

Here am I – as many friends are -- pin-balling amidst contemplation and tasks of the beginning, the middle, and the end of Life.  Such in-my-face thoughts have me swirling in a dense murk.

A cup of coffee and a pale yellow primrose keep me company as I write.  The pale sun fades even more behind the snow-spitting clouds and does not invite me outside into this bleak day.

Quietly I sit here in my room, alone in the house, and ponder Life and the Cosmos.

Posted by TravelingArtista at Saturday, March 04, 2017